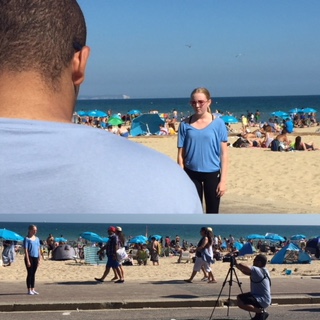 This weekend Nicola has been collaborating with dance artist Dan Martin, PDSW Young People’s Producer Claire Wakefield and young people in the South West on creating a dance for camera.

The project started with a Q & A session with choreographer Wilkie Branson, a film-maker and choreographer who began as a breakdancer in his teens and early 20s. Driven by a passion to tell stories and push boundaries he developed his own movement vocabulary, which is a fusion between breakdance and contemporary, choreographed live dance and film productions that have toured the UK and the world, and he continues to work internationally as a movement director.

Later the dancers had the opportunity to watch TOM; choreographed by Wilkie, an integrated dance-for-camera installation combining cutting edge technologies in film, animation & sound design that they watched end-on with immersive surround sound.

In this emotive choreography and handcrafted digital world we follow TOM on his daily commute as he struggles to remember what life was like as a boy & how he became the man he is now. Set in a hinterland between the civilised world & the wild, TOM tells the story of one man’s journey to rediscover who he really is.

< During the creative project Ami, (featured in the photo above) explored the idea of entrapment, the battle between inner thoughts and its ability to restrict movement.